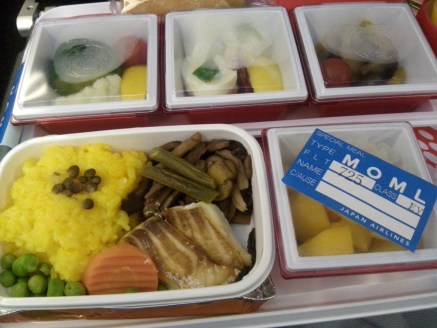 In-flight halal foods served during my recent trip to Japan. Thanks you, Japan Airlines!

As a Muslim –sometimes spelled Moslem– and a frequent visitor to Japan as well, this is really a good news for me.

In order to attract more Muslim tourists to come, Japan will hold a major halal-themed international expo in Chiba Prefecture in November 26 and 27.

According to recent statistics, there are around 176,500 tourists came from Malaysia in 2013 and 136,800 tourists from Indonesia.

Halal, often used in reference to foods, simply means permitted or lawful. The criteria specify both what foods are allowed, and how the food must be prepared.

The most common example of non-halal food is pork. According to Wikipedia, the criteria for non-pork items include their source, the cause of the animal’s death, and how it was processed.

Titled Japan Halal Expo 2014, the two-day event in the Makuhari Messe convention center in the city of Chiba, will essentially seek to boost public awareness of halal fare, enlighten visitors on the latest market trends surrounding Muslim tourists and allow Japan-based Muslims to give feedback on whether this is a Muslim-friendly nation.

The number of tourists from Muslim-majority countries rose sharply last year thanks to drastic visa relaxations, including a visa waiver and a longer-term stay, targeting a group of Southeast Asian countries.